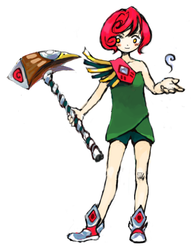 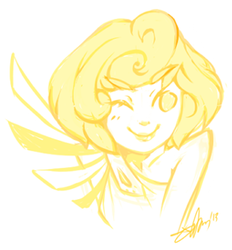 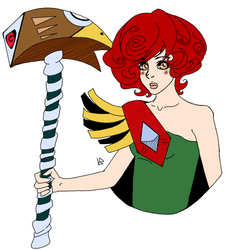 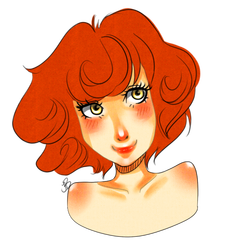 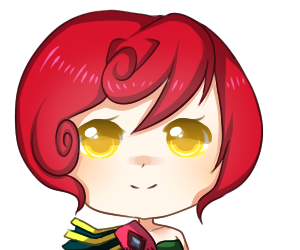 Protagonist! She was born in a city of clouds but she doesn't remember her childhood much. She's the unofficial leader of the travelling troupe.

She's crazy, impulsive and literally fearless, so she gets her crew into trouble all the time. She'll often command people to do ridiculous things, which makes them question her position as leader.
She loves helping people and she always stands up for what she thinks is right, even if it means shitting on the law. But she's also a fame monster. She sucks at stealth because she loves making her presence known.
She almost never takes things seriously, but does have solemn moments. She's a tomboy who wishes she was more feminine. She has a shorty complex. When she's really angry, she turns into a smiling psycho loli killer.

Passeus: Her best friend. She likes to call him Passe. They bicker and tease each other a lot (she particularly likes to make fun of how flamboyantly gay he is), but he is probably one of the first people she will confide in, on the rare occasion that she wants to confide in someone at all.

Ven: He confuses her a lot because he never talks and never listens. At the beginning she just smacks him back into the real world, but eventually learns certain keywords that make him snap to attention. She rears him like a lost puppy since he's incapable of taking care of himself.

Ijerah: They have girl talks. Lots of girl talks. Perplexi is younger but knows a lot more about 'stuff', so she takes plenty of time to corrupt the poor innocent lamb. Ironically Perplexi is also very protective of her and makes sure she doesn't cross paths with strange men in dark alleyways.

Haile: Views him as an honorable rival and good friend. She loves challenging him to fights because he's about as cocky as she is, and because he will fight her seriously. She feels that they are vaguely connected somehow.

Qxyzq: Normal people shy away from her, but Perplexi is fascinated with her. She'll often read whatever Q is reading over her shoulder in as creepy a fashion as possible (although Q doesn't mind at all)

Mire: Mire likes to come off as mature but Perplexi just pats her on the head and treats her like the 10 year old she is, which pisses her off.

She wields a lightweight totem-like hammer that amplifies her wind power. Its damage output is mostly magical. It hits hard and is good for area of effect attacks, but lacks precision.