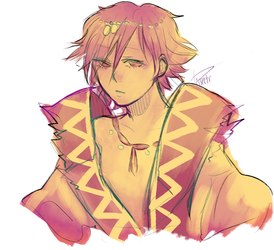 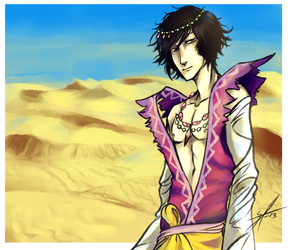 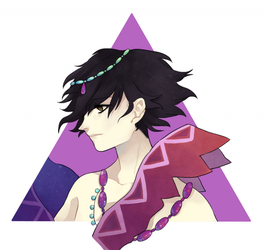 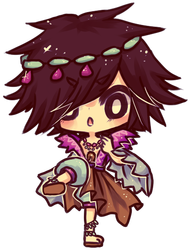 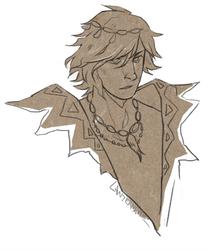 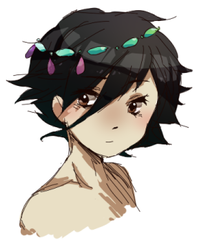 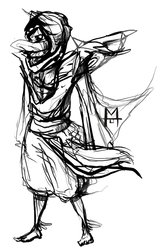 Tritagonist. A lost prince, he has vague memories of a kingdom he was once aligned to rule, but the only thing he saw when he woke was endless sand. After a few years of wandering the desert and almost starving to death, he was found by Perplexi's crew and taken aboard.

He doesn't like to talk much and can go for days on end without speaking a word. He spends most of his time daydreaming or sleeping, which he does while walking. When awake, people still have to repeat their sentences a few times before he realizes he's being talked to. There hangs a disconnect between him and the others, like he is living in a parallel universe. He was raised in the royal court, so he still speaks/acts like a prince sometimes.
When he meets Ijerah, he does a 180 and learns how to live again. He becomes a wise, kind, smiley and charming prince, though he still likes to sleep a lot.

Perplexi: Because she saved his life, he is very loyal to her, but she still has trouble getting his attention.
Passeus: He thinks Passeus is really funny, much to Passeus's chagrin. At first they don't talk much (because he sleeps all the time) but as he gets better they become good comrades and even exchange banter. Only, Ven disapproves of his capricious personality and makes sure he stays far far away from Ijerah.
Ijerah: He is struck by everything about her - the way she moves & dances, her innocent personality and vibrant smile. She pretty much reminds him of everything that's beautiful in life. Eventually he ends up falling in love with her. He is most manly and protective when he's around her. P.S. he's not shy, he actually leads their relationship.
Qzyzq: At first he thinks she's just a cute kid, but when he finds out what she can do to him he gets batshit scared of her and starts having nightmares about her eating him for breakfast.

He doesn't carry weapons, preferring to use pure mana against his opponents. Although his affinity is water, he is very apt in all other elements and can always play them to his advantage.